Mr. Mays is Principal of Rocking M Capital and Mays Family Enterprises. He worked at Clear Channel Communications from 1989-2013 where he had various positions including Chairman/CEO. In addition to participating in various volunteer activities, Mark also serves on the Vanderbilt University Board of Trust, the Board of the Alamo Area Council of Boy Scouts of America, the Texas Biomedical Research Foundation and the Southwest Research Institute Board. Mark has been recognized for his community involvement including receiving the 2005 Spirit of Life Honoree from City of Hope. Mark graduated from Vanderbilt with a B.A., cum laude, in Economics and Mathematics in 1985. He also received an M.B.A. in Finance and Accounting from Columbia University in 1989. Born in San Antonio, Texas, Mark and his wife Patti have six children. Mark P. Mays was Clear Channel's President and Chief Operating Officer from February 1997 until his appointment as our President and Chief Executive Officer in October 2004. He relinquished his duties as President in February 2006. Mr. Mark Mays has served as a director since May 1998. Mr. Mark Mays is a director of our publicly traded subsidiary, Clear Channel Outdoor Holdings, Inc. Mr. Mark Mays is the son of L. Lowry Mays, Clear Channel's Chairman and the brother of Randall T. Mays, Clear Channel's President and Chief Financial Officer. 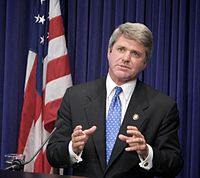