Blake W. Nordstrom, part of the fourth generation to lead his family’s namesake retail company through one of the industry’s most tumultuous periods, died in Seattle on Wednesday morning January 2 2019. He was 58. Blake Nordstrom, who disclosed a lymphoma diagnosis in December 2018, is remembered by employees, customers and others as a humble leader who treated employees as family. Mr. Nordstrom rose to lead the company co-founded in 1901 as Wallin & Nordstrom on Fourth Avenue and Pike Street in Seattle by his great-grandfather, Swedish immigrant John W. Nordstrom. Bruce Nordstrom, along with another third-generation family member, director John Nordstrom, retired in 2006, leaving the fourth generation fully in charge. He attended Mercer Island High School, showing early leadership acumen as manager of the basketball team. Mr. Nordstrom studied economics at the University of Washington, graduating in 1982. President of the Company since August 2000. Mr. Nordstrom previously served as Executive Vice President and President of Nordstrom Rack from February 2000 to August 2000, and as Co-President of the Company from 1995 to February 2000. Mr. Nordstrom is a great-grandson of the Company founder and has been employed by the Company since 1976. He is also a director of the Federal Reserve Bank of San Francisco. 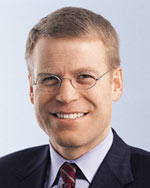