James R. Huffines has more than 35 years of experience in banking and finance. He most recently served as COO of Subsidiaries of Hilltop Holdings from 2016-2017 and was on the Hilltop Holdings board of directors from 2012-2017. Huffines spent 14 years at PlainsCapital Bank, joining in 2001 as Central and South Texas Region Chairman. He provided strategic direction for PlainsCapital’s entry into Austin in 2001 and later San Antonio, in 2004. He was then President and COO of PlainsCapital Corporation from 2010-2015. Huffines attended The University of Texas at Austin and graduated with a B.B.A. in finance. He also attended the Southwestern Graduate School of Banking at Southern Methodist University. Huffines served twice as chairman of the UT System Board of Regents. In 2008 he was inducted into The University of Texas McCombs School of Business Hall of Fame. In 2011 he received the UT Distinguished Alumnus Award. He is currently on the Dallas Citizens Council board of directors and Executive Committee, chairman of the Governor’s University Research Initiative Advisory Board, a member of the Texas Philosophical Society, and chairman of the University of Texas Chancellor’s Council. Huffines was also previously a trustee of the Bob Bullock Texas State History Museum. He served on the Texas State History Museum board of trustees from 2003-2011 and is a former vice chairman of the Texas Business Leadership Council. 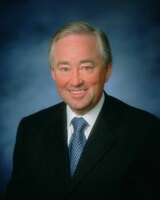