After earning degrees from Kenyon, Case Western, and the Cleveland-Marshall College of Law, Mike Gibbons went into the world of business. In 1989, at the age of 37, Mike Gibbons launched his own company. That company became Brown Gibbons Lang & Company, Mike Gibbons has also served as Managing Partner of the Cleveland Crunch professional soccer franchise, Co-Owner of Cheboygan Tap & Tool, and Co-Owner of Northern Lake Properties. He served as Ohio Finance Co-Chair for Donald J. Trump for President in 2016 and gave even more money to the Trump re-election campaign in 2020. In June of 2017, Mike launched a campaign for U.S. Senate. Mike and his wife Diane Gibbons raised five children. He is on the Board of Trustees for Greater Cleveland Sports Commission, the Visiting Committee for Case Western Reserve University Weatherhead School of Management, and the Board of Visitors of the Cleveland-Marshall College of Law. 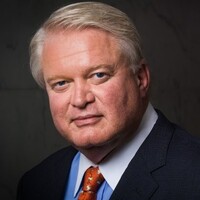