Burgess Owens is the Congressman from Utah’s Fourth Congressional District. Born in the segregated South, he saw people of all backgrounds come together to work tirelessly against adversity. As a young man, Burgess was one of the first four black athletes recruited to play football at the University of Miami and the third black student there to receive a scholarship. He was the 13th pick in the first round of the 1973 NFL draft and joined the New York Jets, later playing safety for ten seasons in the NFL for the New York Jets and the Oakland Raiders, winning the Superbowl with the 1980 Raiders’ team. After retiring from the NFL, Burgess worked in the corporate sales world and eventually moved the Owens family to beautiful Utah. Before being elected to Congress, he started Second Chance 4 Youth, a non-profit dedicated to helping troubled and incarcerated youth. Burgess now serves as a member of the House Education and Labor Committee and House Judiciary Committee. OWENS, Burgess, a Representative from Utah; born in Columbus, Ohio, August 2, 1951; graduated from James S. Rickards High School, Tallahassee, Fla., 1969; B.S., University of Miami, Coral Gables, Fla.; professional athlete; business executive; nonprofit executive; entrepreneur; elected as a Republican to the One Hundred Seventeenth Congress (January 3, 2021–present). 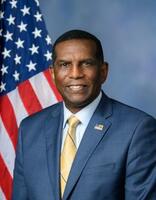