Marie C. Johns, a member of the Howard University board since 2014, is chief executive officer of PPC-Leftwich, a minority/woman-led firm, where she focuses on management consulting, business development, organizational effectiveness and public policy consulting. The founder and president of L&L Consulting LLC, Mrs. Johns has been a leader in business, community and government service for more than 30 years. She served as deputy administrator of the U.S. Small Business Administration (SBA) from 2010 to 2013: she was nominated by President Barack Obama and unanimously confirmed by the U.S. Senate. As a result of her initiatives, the SBA supported more than $30 billion in lending to more than 60,000 small businesses, the most capital going to small business in SBA history. In addition to other duties, Mrs. Johns chaired the President’s Interagency Task Force on Veterans’ Small Business Development, and advocated for “Start Young,” an SBA/U.S. Department of Labor initiative that provides entrepreneurial training to Job Corps students. Prior to government service, Mrs. Johns held senior positions in the telecommunications industry, including president of Verizon-Washington. Under her leadership, the company developed and implemented a regulatory plan that served as a model for the corporation. An example of her on-going efforts to leverage corporate resources for greater community good was the SEEDS program (Students Educated for Economic Development Success), which prepared students who had dropped out of high school to complete their high school requirements and receive technical training for jobs in the telecommunications industry. Mrs. Johns has chaired several boards including the YMCA of Metropolitan Washington, DC, Leadership Washington, and DC Chamber of Commerce. Mrs. Johns previously served on the Howard University Board of Trustees from 2000 to 2010, and was the founding chair of the HU Middle School of Mathematics and Science Board until her appointment to the SBA. She received both her Bachelor of Science and Master of Public Administration degrees from Indiana University. 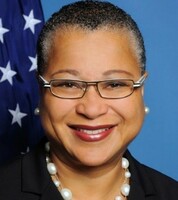