Ray Mabus served as the 75th United States Secretary of the Navy, the longest to serve as leader of the Navy and Marine Corps since World War I. During his tenure, the Navy went from building fewer than five ships per year to having more than 70 ships under contract, an average of 14 ships per year put under contract. Most of those contracts are fixed-price, multi-year deals assuring value for taxpayers and certainty for the Navy’s industry partners. Mabus’ shipbuilding efforts reversed the decline of the Navy’s fleet and will increase it to more than 300 ships by the end of the decade despite fiscal constraints. Leading the world's only global Navy, Mabus has traveled over 1.1 million miles, visited over 150 countries and territories and all 50 states, to meet with Sailors and Marines forward deployed or stationed around the world, to maintain and develop international relationships, and to reconnect the American public with the Navy and Marine Corps, which he calls "America's Away Team." He has traveled to Afghanistan on 12 separate occasions, in recognition of the sacrifice and service of Sailors and Marines deployed in combat zones. To prepare service members and their families for the high-tempo operations of today’s Navy and Marine Corps, Mabus announced in 2012 the “21st Century Sailor and Marine” initiative, designed to build and maintain the most resilient and ready force possible. He recently announced the tripling of paid maternity leave, from six weeks to 18 weeks. Mabus also directed the Navy and Marine Corps to change the way they use, produce and acquire energy, setting an aggressive goal of relying on alternative sources for at least 50% of their energy by 2020. In 2012, President Obama announced in his State of the Union address that the Navy and Marine Corps would purchase or facilitate the production of 1GW of renewable energy (50 percent of total shore energy) for use on Navy and Marine Corps installations by 2020. This goal will be reached four years early. The Navy also demonstrated the Great Green Fleet in 2012, a carrier strike group in which every participating U.S. Navy ship and type of aircraft operated on alternative energy sources including nuclear energy and biofuels. In June 2010, as an additional duty, President Obama appointed Mabus to prepare the long-term recovery plan for the Gulf of Mexico in the wake of the Deepwater Horizon oil spill. Mabus’ report was released in September 2010 and met with broad bi-partisan support with most recommendations being passed into law by Congress as the Restore Act. Included in the legislation was a fund to aid in the Gulf Coast’s recovery by distributing 80 percent of any civil penalties awarded as a result of the damage caused by the disaster. To date, civil penalties total more than five billion dollars. Before his appointment by President Obama, Mabus held a variety of leadership positions. From 1988 to 1992, Mabus served as Governor of Mississippi, the youngest elected to that office in more than 150 years. Mabus was Ambassador to the Kingdom of Saudi Arabia from 1994-1996 and later was Chairman and CEO of a manufacturing company which he led out of bankruptcy. Mabus has been recognized for his leadership of the Navy and Marine Corps on multiple occasions. In 2013, he was named one of the top 50 highest rated CEOs by Glassdoor, an online jobs and career community. Mabus was the only person in government to receive this award. Secretary Mabus is a native of Ackerman, Mississippi, and received a Bachelor's Degree, summa cum laude, from the University of Mississippi, a Master's Degree from Johns Hopkins University, and a Law Degree, magna cum laude, from Harvard Law School. After Johns Hopkins, Mabus served in the Navy as an officer aboard the cruiser USS Little Rock. 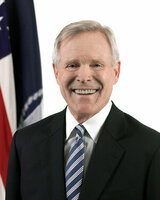