Wife is Nancy, 3 children. Anschutz got his start in oil and gas, has made a habit of getting in and out of new plays early. In late 2010 sold $3 billion worth of Marcellus shale gas and Bakken shale oil fields. Where to deploy that cash? Anschutz' privately held AEG controls 120 entertainment venues worldwide, including iconic arenas like the Staples Center in L.A. and The O2 arena in London. It fills these arenas with much of its own in-house entertainment: sports teams like the L.A. Lakers and L.A. Kings and a stable of musicians including the Black Eyed Peas, Cher, Jon Bon Jovi and Justin Bieber. Anschutz last year celebrated the completion of AEG's $2.5 billion L.A. Live complex, which adds a hotel, condos, restaurants and smaller theaters adjacent to Staples Center. The vision: expanding the complex even more by replacing L.A.'s outmoded convention center with a new NFL stadium. Anchutz's film group has also produced 33 films including the "Chronicles of Narnia" series and "Ray." Entertainment is just the latest chapter for Anschutz. The son of an oil driller, he bought out his dad, went broke, and then struck oil in Utah and Wyoming. He parlayed the proceeds into railroads and then used the rights of way to lay fiberoptic cable, which he spun off into Qwest Communications. Despite selling $1.5 billion of Qwest shares before they nosedived, Anschutz was never implicated in an insider trading scandal that netted Qwest CEO Joe Nacchio. But can't win 'em all. In recent months he lost a big complicated tax case over whether or not he sold $375 million in oil company shares as part of a tax dodge a decade ago. I.R.S. wants at least $144 million. Anschutz will appeal. 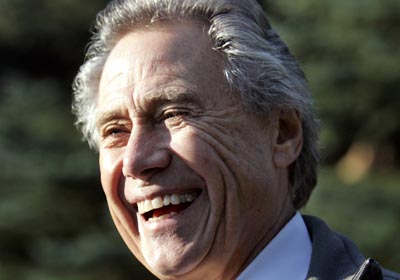