David Boies is founder and chairman of Boies Schiller Flexner LLP, a law firm founded in 1997. Previously, he was a partner for over twenty years at the law firm Cravath, Swaine & Moore LLP in New York City. A 1966 magna cum laude graduate of the Yale Law School, Boies is one of Time’s 100 Most Influential People in the World. For a unprecedented seven times, he has been named Global International Litigator of the Year by Who’s Who Legal as well as Litigator of the Year by the American Lawyer and runner-up Person of the Year by Time. His awards include the Award of Merit from Yale Law School; the ABA Medal from the American Bar Association; the Vanderbilt Medal from New York University Law School; the Pinnacle Award from the International Dyslexia Association; Outstanding Learning Disabled Achievers Award from the Lab School; the William Brennan Award from the University of Virginia; the Role Model Award from Equality Forum; the Lead by Example Award from the National Association of Women Lawyers; and a Lifetime Achievement Award from the Mississippi Center for Justice. Clients have included Altria, American Express, Apple, Barclays, CBS, DuPont, FDIC, Gary Jackson (former president of then-Blackwater), Heartheaded Productions, HSBC, IBM, Maurice Greenberg and Starr International, NASCAR, numerous NBA players, the NFL, the New York Yankees, Oracle, Sony, Theranos, and many others. From 1998 to 2000, he served as special trial counsel for the U.S. Department of Justice in its antitrust suit against Microsoft. Boies also served as counsel for former Vice President Al Gore in the 2000 election Florida vote count. With Ted Olson, he won judgments establishing the constitutional right to marry for gay and lesbian citizens in California. Mary and David met in 1977 when they negotiated President Jimmy Carter and Senator Ted Kennedy’s airline deregulation legislation: Mary on behalf of the White House and David as chief counsel and staff director of the U.S. Senate Judiciary Committee. (They continue to debate its merits.) They have been married since 1982 and have two grown children. 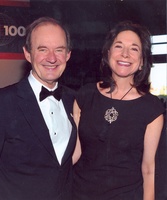