First joining the Centers for Disease Control and Prevention in 1988 as an Epidemic Intelligence Service officer, Anne Schuchat has filled a number of leadership roles within the organization, including acting director; she’s currently principal deputy director. The author of more than 230 scientific articles, chapters, and reviews, Schuchat has played key roles in CDC emergency responses including to the 2009 H1N1 flu pandemic and the 2003 SARS outbreak in China. She was elected to the National Academy of Medicine in 2008. Education: Swarthmore College, Dartmouth Medical School (MD) 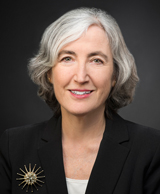