Former director of the Center for Research in International Studies, Stanford University

Stanford University's Robert Ward, pioneer in international studies, died at 93 in 2009. Robert Ward launched his academic career expecting to become an expert on the Balkans. He learned Bulgarian and Croatian in graduate school, and began mapping his life as a budding political scientist. Then World War II intervened. The Naval Intelligence Service swept through the country's college campuses looking for students who showed a knack for learning difficult languages. They found Ward studying at the University of California-Berkeley and sent him to the Navy Language School in Colorado. A year later, Ward was speaking Japanese and working on Gen. Douglas MacArthur's staff as a translator. He spent the rest of his life teaching, writing books and fostering a greater understanding of Japan, comparative politics and international relations. At Stanford – where he taught from 1973 until his retirement in 1987 – he founded and was the first director of the Center for Research in International Studies, a precursor to the Freeman Spogli Institute for International Studies. Born in San Francisco in 1916, Ward decided against taking over the air conditioner installation business started by his father and earned a bachelor's degree from Stanford in 1936. After his academic interruption during WWII, he received his doctorate from Berkeley in 1948. He was immediately hired at the University of Michigan, where he taught political science until 1973. While at Michigan, he directed the Center for Japanese Studies and was president of the American Political Science Association and the Association for Asian Studies. He was also a member of the national council of the National Endowment for the Humanities from 1968 to 1973. After rejecting several job offers while at Michigan, he quickly accepted a position at Stanford in 1973. His daughter Erica had graduated from the university a year earlier, and his wife, Constance Barnett, was a member of the Class of 1939. In addition to his daughter, Erica, and her husband, Ralph Gerson, Ward is survived by his brother, John Ward of Kentfield, Calif., and granddaughters Stephanie and Maddie Gerson. 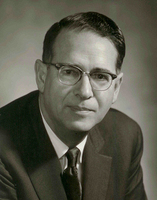