Francis Fukuyama is Olivier Nomellini Senior Fellow at the Freeman Spogli Institute for International Studies (FSI) at Stanford University, resident in FSI's Center on Democracy, Development, and the Rule of Law. He was previously the Bernard L. Schwartz Professor of International Political Economy at the Paul H. Nitze School of Advanced International Studies (SAIS) of Johns Hopkins University, where he was director of SAIS' International Development program. Dr. Fukuyama has written widely on issues relating to questions concerning democratization and international political economy. His book, The End of History and the Last Man, was published by Free Press in 1992 and has appeared in over twenty foreign editions. His most recent books are America at the Crossroads: Democracy, Power, and the Neoconservative Legacy, and Falling Behind: Explaining the Development Gap between Latin America and the United States. His next book, The Origins of Political Order, will be published in March 2011. Francis Fukuyama was born on October 27, 1952. He received his B.A. from Cornell University in classics, and his Ph.D. from Harvard in Political Science. He was a member of the Political Science Department of the RAND Corporation from 1979-1980, then again from 1983-89, and from 1995-96. In 1981-82 and in 1989 he was a member of the Policy Planning Staff of the US Department of State, the first time as a regular member specializing in Middle East affairs, and then as Deputy Director for European political-military affairs. In 1981-82 he was also amember of the US delegation to the Egyptian-Israeli talks on Palestinian autonomy. From 1996-2000 he was Omer L. and Nancy Hirst Professor of Public Policy at the School of Public Policy at George Mason University. He served as a member of the President's Council on Bioethics from2001-2004. Dr. Fukuyama is chairman of the editorial board of The American Interest, which he helped to found in 2005. He is a senior fellow at the Johns Hopkins SAIS Foreign Policy Institute, and a non-resident fellow at the Carnegie Endowment for International Peace. He holds honorary doctorates from Connecticut College, Doane College, Doshisha University (Japan), and Kansai University (Japan). He is a member of the Board of Trustees of the Rand Corporation, and member of the advisory boards for the Journal of Democracy, the Inter-American Dialogue, and The New America Foundation. He is a member of the American Political Science Association and the Council on Foreign Relations. He is married to Laura Holmgren and has three children. Perhaps best known for his 1989 work, "The End of History," in which he proclaims "the universalization of Western liberal democracy as the final form of human government." 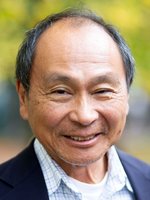