Democratic US Senator from IL; former US Representative 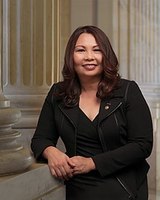