Former chair of the Federal Reserve

Alan Greenspan was born on the 6th March 1926 in New York City to Hungarian Jewish parents. Greenspan was raised by his mother and grandmother. After completing high school, Greenspan attended the famed Juilliard School where he studied the clarinet. Greenspan dropped out of the school to play with Henry Jerome and his traveling Orchestra. Greenspan returned to studying in 1948, this time it was Economics at New York University. Greenspan attained a Masters degree in Economics in 1950. Greenspan then attended Columbia University for a short period to study advanced economics however his acceptance of a job with the National Industrial Conference Board, caused him to curtail his studies at Columbia. Greenspan worked on the Industrial Conference Board from 1948 to 1953. In 1951, Greenspan met and married Joan Mitchell, however the marriage wasn't successful and the couple got an annulment in 1952. Mitchell was an artist and had introduced Greenspan to the writer Ayn Rand. Rand wrote the novels 'The Fountainhead' and 'Atlas Shrugged' which outlined her philosophy of 'Objectivism'. Greenspan was influenced by this Rand philosophy and stuck up a friendship with Rand, which saw Greenspan contribute to Rand's newsletter. Greenspan as became a member of 'The Ayn Rand Collective', a group of close confidants to Rand. In 1954, Greenspan formed a company with a bond trader named William Townsend. The company named Townsend & Greenspan, provided economic consulting. Greenspan served as President of the company from 1954 to 1974. In 1967, Greenspan provided his service to the then President Richard Nixon as the Director of Domestic Policy Research. Between 1974 and 1977 Greenspan served in under President Gerald Ford as the Chairman of the Council of Economic Advisors. During this period, Greenspan as served as a director on the boards of many big corporations, including J.P. Morgan and the Mobil Corporation. In the late 1970's, Greenspan dated the journalist and media personality, Barbara Walters. However, Greenspan didn't marry again until 1997 after a 12 year relationship with journalist Andrea Mitchell who he met in 1984. From 1981 to 1983 Greenspan served as the chairman of the National Commission on Social Security Reform. in 1987, Greenspan was nominated by President Ronald Reagan for the open position of Chairman of the Federal Reserve Board. The previous Chairman being Paul Volcker. Greenspan's nomination was approved by the Senate. Just two months into his tenure as Chairman Greenspan had to deal with 'Black Monday', the Stock Market Crisis of 1987, where the Dow Jones lost over 20% of it's value in one day. Greenspan served as Chairman of the Federal Reserve Board until 2006, setting a record for the longest serving chairman. Greenspan was succeeded by the economist Ben Bernanke. In 2005, greenspan was awarded the Presidential Medal of Freedom by George W. Bush, which is the highest civilian accolade. Greenspan has also been awarded the Knight Commander of the British Empire from the UK and the Legion of Honor from France. In 2007, Greenspan wrote his memoirs, entitled The Age of Turbulence: Adventures in a New World . 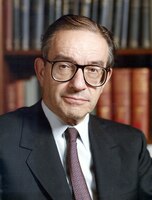