Peter R. Orszag is vice chairman of global banking at Citigroup, Inc. and a member of the senior strategic advisory group there. He is also an adjunct senior fellow at the Council on Foreign Relations and served as a contributing columnist at the New York Times. On January 20, 2009, Dr. Orszag was confirmed the director of the White House Office of Management and Budget, where he served until July 2010. In that role, he oversaw the administration's budget policy and coordinated the implementation of major policy initiatives throughout the federal government. For the two years prior, Dr. Orszag served as director of the Congressional Budget Office, supervising the agency's work in providing objective, nonpartisan analyses of economic and budgetary issues. Under his leadership, the agency significantly expanded its focus on areas such as health care and climate change. Previously, Dr. Orszag was the Joseph A. Pechman senior fellow and deputy director of economic studies at the Brookings Institution. While at Brookings, he directed The Hamilton Project and the Retirement Security Project. During the Clinton administration, he served as a special assistant to the president for economic policy and before that a staff economist and then senior adviser and senior economist at the President's Council of Economic Advisers. He also founded and subsequently sold an economics consulting firm. Dr. Orszag graduated summa cum laude in economics from Princeton University and holds a PhD in economics from the London School of Economics, which he attended as a Marshall Scholar. He has coauthored or coedited a number of books and is a member of the Institute of Medicine of the National Academies of Sciences, the Council on Foreign Relations, the Hamilton Project advisory council, the Marshall Scholarship alumni advisory board, and Phi Beta Kappa. 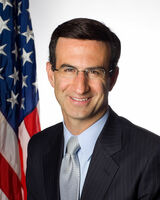