Jeffrey Lichtman has been a criminal defense attorney for over 28 years, practicing primarily in the federal and state courts of New York. Beyond New York, Mr. Lichtman handles federal cases, appeals and investigations throughout the country, recently in Alabama, California, Illinois, Pennsylvania, Massachusetts, New Jersey, Florida, Georgia, Virginia, South Carolina and North Carolina. His clients include those charged with white collar and non-white collar offenses, such as RICO violations, narcotics offenses, money laundering, securities fraud, health care fraud, tax evasion and murder and murder conspiracy. Many of his cases and clients are internationally known and have been featured prominently in the media. A 1990 graduate of Duke University School of Law, Mr. Lichtman opened his own law firm in 1999 and since then has had extraordinary success on some of the country’s largest stages. Recent clients include Thomas Rachko, a retired New York Police detective accused of robbing drug dealers; Jacob Orgad, described by the government as the “largest MDMA (ecstasy) trafficker” ever arrested in the United States; various stars of the music industry including The Game and Fat Joe; AIG executives named in the New York Attorney General’s probe of the insurance industry; John A. Gotti, the son of the infamous mob boss; and Joaquin “El Chapo” Guzman, in which during the 3 ½ month trial Mr. Lichtman’s work was described by the media as “an astonishing performance” and “so wildly entertaining.” The Gotti trial ended with the dismissal of three murder conspiracy charges, an acquittal on a $25 million securities fraud charge and a deadlocked jury on every remaining count. The media described the verdict as an “unbelievable courtroom upset” and Mr. Lichtman’s work as “brilliant.” His cross-examinations of the government’s witnesses were described in the media as a “relentless pounding” in which witnesses were “put through the blender” and “shredded.” In sum, Mr. Lichtman’s high-profile clients don’t just make the news – they win their cases. J.D., Duke University School of Law, 1990 B.A., Emory University, 1987 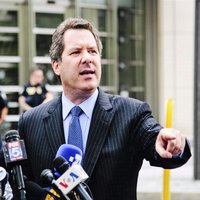