former US Senator from Alaska

Senator Mark Begich is in his third year representing Alaska in the U.S. Senate, where his primary focus is building a strong Alaska economy. He was recently named chairman of the Commerce Committee’s Subcommittee on Oceans, Atmosphere, Fisheries and Coast Guard, which has broad jurisdiction over important Alaska issues. He works on behalf of Alaska’s servicemen and women on the Armed Services Committee and also is a member of the Veterans, Homeland Security and Budget committees. As chairman of the Senate Democratic Steering and Outreach Committee, Senator Begich holds the Number Five position in the leadership for the Senate majority, which he uses to advocate on Alaska issues. Senator Begich was elected to the Senate in 2008 after serving as mayor of Anchorage for nearly six years. Born and raised in Anchorage, Senator Begich's other priorities include reducing the national deficit, tax reform, and building a national energy policy that emphasizes Alaska's oil and gas resources, an Alaska natural gas pipeline and the state’s many renewable resources. A lifetime member of the NRA, Senator Begich is a strong advocate for the 2nd Amendment and the rights of Alaskans and all Americans to keep and bear arms. In 1988, at age 26, Mark was the youngest person ever elected to the Anchorage Assembly where he served for nearly 10 years. During that time, his colleagues three times elected him chairman, Anchorage's second highest political office, and he also served as chair of the budget committee. During his time as mayor, Anchorage went through the biggest building boom in a generation, attracting millions of dollars worth of public and private investment. Mark's parents, Pegge and the late Nick Begich, came to the territory of Alaska in 1957 as teachers. Following a career as a teacher and superintendent of military schools on Ft. Richardson, Nick was elected Alaska's third U.S. Congressman. While running for reelection, in 1972, Begich's airplane disappeared in the Gulf of Alaska when Mark was 10 years old. Senator Begich is married to Deborah Bonito, a successful businesswoman. They have a young son, Jacob. (son of Nicholas J. Begich), a Senator from Alaska; born in Anchorage, Alaska, March 30, 1962; graduated Stellar High School 1981; small business owner; real estate and property management; member, Anchorage Assembly 1988-1998, chair 1993 and 1996-1998; Alaska Student Loan Corportion 1995-2002, chair 1996-2002; Alaska Commission of Post-secondary Education 1995-2002, chair 1996-1998; University of Alaska Board of Regents 2001-2002; mayor of Anchorage 2003-2009; elected as a Democrat to the United States Senate in 2008 for the term ending January 3, 2015. 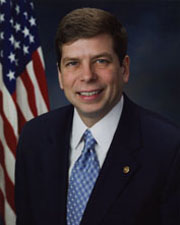