US Representative for Nevada's 1st district. Dina Titus has taught American and Nevada government classes at the University of Nevada, Las Vegas, for over 30 years. She represented the people of Senate District 7 in the Nevada Legislature for 20 years, serving as the Democratic Minority Leader from 1993 to 2008. Dina was elected to the US House of Representatives from Nevada's Third Congressional District in November 2008. Defeated in 2010, she returned to Congress in 2012, in NV District 1 After receiving her Bachelor's degree from William and Mary, Dina went on to earn a Master's degree from the University of Georgia and a Doctorate from Florida State University. She taught for a year at North Texas State University in Denton and then moved to Nevada to accept a faculty position at the University of Nevada, Las Vegas. Dina has been married to Professor Thomas C. Wright for over 30 years. Dina is returning to the classroom as a member of the Political Science Department at UNLV, where she will be teaching Women in Politics, State Politics, Legislative Process, Elections, and Nuclear Policy. 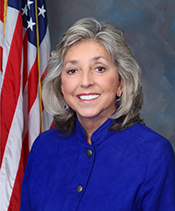