George R. Packard was President of the United States-Japan Foundation from July 1998-October 2019. Dr. Packard was Adjunct Professor of Political Science at Columbia University, where he offered a graduate seminar on US-Japan Relations from Pearl Harbor to the Present. His latest book, Edwin O. Reischauer and the American Discovery of Japan, was published by Columbia University Press in April 2010. Dr. Packard is also Chairman of the Advisory Board at the Weatherhead East Asian Institute at Columbia University. Dr. Packard was Dean of the Johns Hopkins School of Advanced International Studies (SAIS) from 1979 to 1993 where he founded the Johns Hopkins Foreign Policy Institute, the SAIS Review, the Reischauer Center for East Asian Studies, and the Hopkins-Nanjing Center in China. He also served as visiting President of the International University of Japan in Niigata from 1994-1998. Earlier in his career, Dr. Packard was an intelligence officer and later a special assistant to US Ambassador Edwin O. Reischauer in Tokyo. He has also worked extensively in journalism, first as a diplomatic correspondent for Newsweek, and then as White House correspondent and then executive editor of the Philadelphia Evening and Sunday Bulletin. Dr. Packard received from the Japanese Government the Order of the Rising Sun, Gold and Silver Stars in November 2007 for his service in strengthening friendship and understanding between the US and Japan. Dr. Packard received his B.A. (magna cum laude) from Princeton University and his M.A. and Ph.D. from Tufts’ Fletcher School of Law and Diplomacy. He has written or edited eight books and sits on several boards. He lives with his wife, Lavinia, in Washington, DC. 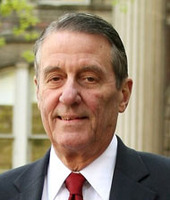