Crawford began his career as a salesman for Inland Steel. He was attending night school at John Carroll University at the time, but dropped out after 21⁄2 years to launch his own business, Cleveland Steel Container, in 1962, to produce paint cans for the paint industry. Two years later, he created the Crawford Group as a family enterprise investing in companies. In 1992 he sold Kay Home Products, a company named after his mother, Kay Crawford, to Park-Ohio Industries. As a result of the sale, he became a major shareholder and chairman and chief executive officer. At the time, Park- Ohio was doing about $60 million in sales. Under his leadership, the company’s sales have risen to $1.3 billion. Crawford said running the family-owned Crawford Group while chief executive of publicly owned Park- Ohio Industries gives him the ability to operate in both the public and private sectors. Crawford served as chairman and CEO of Park-Ohio Holdings and Park-Ohio Industries since 1992 and stepped down as CEO in May 2018. 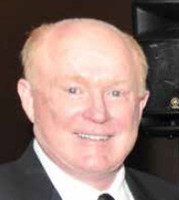