Prior to founding Capitol Strategies (which merged with Crossroads Strategies in January of 2017), Shay served as the Senior Vice President of Denny Miller Associates for more than seven years. With more than two decades of experience on Capitol Hill and in the private sector, Shay provides our clients sage, strategic advice on working with individual Members of Congress and the Administration. During his over-a-decade tenure on Capitol Hill, Shay served as a Legislative Assistant to Senator Patty Murray (D-WA), currently the fourth ranking member of the Senate Democrat leadership and senior member of the Senate Appropriations Committee; and Representative Adam Smith (D-WA), currently the ranking Democrat of the House Armed Services Committee. He has also served as an Assistant Vice President for a Fortune 100 company and as a Vice President in a DC-based government relations consulting firm. Shay began his career with Senator Murray (1993-1997), before serving as a legislative assistant for U.S. Representative Adam Smith (D-WA) (1997-1998). His private-sector experience includes 3 years as an Assistant Vice President of Washington Mutual Inc., where he served as the Aide to the Chairman, President and CEO (1998-2001). Prior to rejoining Senator Murray's staff in 2003, Shay was Vice President of a Washington, DC-based government relations consulting firm (2001-2003). Shay graduated from the University of Washington with a B.A. in Political Science (1993). He lives in Washington, D.C. with his wife Anne and their dog "Hunter". 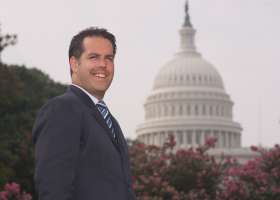