Founder and engineer, Thomas Russell Co., sold to Honeywell in 2016 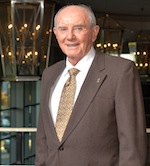