Ed Rogers has been involved in political campaigns, private commercial transactions and other legal, media and market access challenges in various international markets since the mid-‘90s. He regularly assembles teams of lobbyists, lawyers, investment professionals and private investigators to solve problems, manage adversarial situations and achieve positive results for clients. Immediately prior to co-founding BGR Group in 1991, Ed served as the Deputy Assistant to President George H. W. Bush and Executive Assistant to the White House Chief of Staff. Ed also served as Senior Deputy to Bush-Quayle Campaign Manager Lee Atwater from February of 1987 through the general election in 1988. From 1985 through February of 1987, Ed worked in the Reagan White House in the Office of Political Affairs, where he served as Haley Barbour’s deputy as the Special Assistant to the President and Deputy Director of the Office of Political Affairs. Since 2011, Ed has been an opinion writer for the Washington Post, where he writes about politics and the current state of affairs in Washington, D.C., from a Republican point of view. Ed received his JD from the University of Alabama, where he currently serves on the President’s Cabinet. He is a member of the Alabama Bar Association and the Washington, D.C., Bar Association. Ed is a visiting professor at the University of Alabama Law School and remains active in Alabama State politics, where he got his start in the early 1970s. He is also a life member of the Council on Foreign Relations. Ed is a member of the advisory board of the 100,000 Strong Foundation, which was established by the U.S. State Department in 2012 to help answer President Barack Obama’s call to deepen Americans’ understanding of China through study abroad. Ed, his wife Patti, and two of their children reside in McLean, Va. 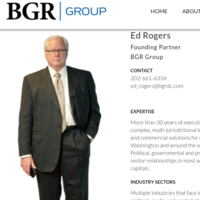