Representative of IL 26 in the State House

Christian is a Bronzeville resident and the current State Representative for the 26th District of Illinois. Christian was raised by his mother, who has been a nurse for 30 years, and his grandfather, who was a union steelworker and an elder at his church in Maywood. Their hard work and commitment to community inspired him to enter public service after graduating from the University of Chicago. Christian began his career as a faith based community organizer on the south side and in the south suburbs. In 2009, in consultation with community leaders and state legislators, Christian drafted the legislation that would become the Urban Weatherization Initiative, a $425 million dollar state jobs program focusing on insulation, weatherproofing and upgrading of single family homes in low and moderate urban areas in the state of Illinois – and a requirement to hire workers from those communities. Christian was a Deputy Field Director for Illinois Lisa Madigan’s re-election campaign in 2010. Christian was also campaign manager for Will Burns’ successful campaign for Alderman of the 4th Ward in 2011. He served as a member of Cook County Board President Toni Preckwinkle’s senior staff. Christian graduated from the University of Chicago with a bachelor’s degree in Public Policy Studies. He is a resident of the Bronzeville community. 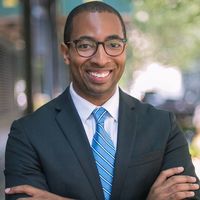