Bruce Wasserstein was born on Dec. 25, 1947, in Brooklyn to Morris W. Wasserstein, a fabric executive, and Lola Schleifer. He graduated from the University of Michigan at the age of 19, moving on to Harvard Law School and the Harvard Business School, where he worked as one of Ralph Nader’s “Nader’s Raiders.” Mr. Wasserstein, who began his career as a lawyer but quickly moved into the more lucrative field of investment banking, worked on some of the biggest deals of the last three decades, including Kohlberg Kravis Roberts’s takeover of RJR Nabisco, immortalized in the book and movie “Barbarians at the Gate.” He also became a member of New York’s social firmament, buying New York magazine, a prominent publication that chronicles the city and its major players. Mr. Wasserstein rarely looked like a stereotypical investment banker, preferring a rumpled look, his shirt often untucked. But he transformed deal-making from a business built on relationships, as practiced by forebears like André Meyer and Felix G. Rohatyn of Lazard, into one more akin to war, built on complex tactics and armies of bankers and lawyers. Mr. Wasserstein is survived by his wife, Angela Chao, an executive at her family’s shipping company and the sister of Elaine Chao, the former labor secretary, and seven children. He adopted the daughter of his sister, the Pulitzer Prize-winning playwright Wendy Wasserstein, who died in 2006. He was divorced three times. 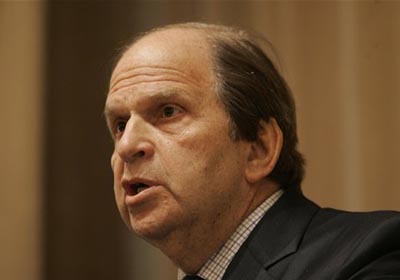