A Representative from Florida; born in Tampa, Hillsborough County, Fla., January 20, 1920; attended the University of Florida, Gainesville, Fla.; LL.B., University of Florida, Gainesville, Fla., 1947; admitted to the Florida bar in 1947; lawyer, private practice; United States Army, the Five Hundred and First Parachute Infantry, One Hundred and First Airborne Division, 1941-1945; member of the Florida state house of representatives, 1953-1958; member of the Florida state senate, 1959-1962; delegate, Democratic National Conventions, 1964, 1968 and 1984; elected as a Democrat to the Eighty-eighth and to the sixteen succeeding Congresses (January 3, 1963-January 3, 1997); chairman, Committee on Ways and Means (One Hundred Third Congress); was not a candidate for reelection to the One Hundred Fifth Congress in 1996. Sam Gibbons, Chairman of Gibbons & Company, provides strategic counsel and advocacy on a broad range of public policy and international trade law matters to global businesses and governmental entities. While Chairman of the Ways and Means Subcommittee on Trade, Mr. Gibbons led trade and interparliamentary delegations throughout Europe, Latin America, the Middle East, and Asia. He conferred regularly with heads of governments, their trade and economic officials, and business leaders in the United States and abroad. During his 28 years on the House Committee on Ways and Means, Mr. Gibbons advocated reform of the Federal income and payroll tax systems. He was a vigorous advocate of legislation to repeal these systems and replace them with a simplified, broad-based, border-adjustable, value-added tax. He was also involved in the development of every Federal healthcare financing law since the inception of Medicare in 1966. A strong proponent of pension protections and pension portability, he was the original sponsor of legislation creating the individual retirement account (IRA). Before election to the United States Congress, Mr. Gibbons served for 10 years in the Florida Legislature, where he was instrumental in establishing the University of South Florida, now the 11th largest university in the United States. Prior to that he practiced law in Tampa, Florida. He received his undergraduate and law degrees from the University of Florida and is admitted to practice law in Washington, D.C., Florida, and before the United States Supreme Court. Clifford Gibbons has over twenty-five years experience representing clients before the U.S. Congress, the White House, Federal departments, regulatory agencies and foreign governments. His areas of expertise include taxation, appropriations, international trade, health care, higher education, insurance, financial services, environmental policy and food and product safety. He also advises clients on economic and commercial opportunities to enhance competitive market advantages. Mr. Gibbons received his law degree from Florida State University and his undergraduate degree from University of South Florida. His professional career began in 1976 as a trial attorney prosecuting criminal cases for the State Attorney's office in Tampa, Florida. In 1979, he served in the Office of Vice President of the United States and was later appointed Special Assistant to the President, in the Office of the United States Trade Representative. While serving in that position, Mr. Gibbons authored A Preface to Trade. After leaving the White House, Mr. Gibbons served as counsel to the Grocery Manufacturers of America, Inc. and later with the government relations practice with the Washington law firm of Hogan & Hartson, L.L.P. In 1990, Mr. Gibbons established the government relations and public affairs firm of Gibbons & Company, Inc., where he serves as president. 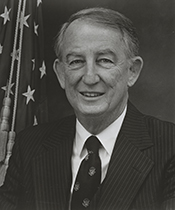