US Representative from Texas

A Representative from Texas; born in Lake Jackson, Brazoria County, Tex., February 22, 1947; attended Lake Jackson Elementary School; graduated, Brazosport High School, Freeport, Tex., 1965; B.A., Southern Methodist University, Dallas, Tex., 1969; J.D., Southern Methodist University School of Law, 1972; admitted to the Texas bar, 1972 and commenced practice in Dallas; served as counsel to a committee of the Texas senate, 1973; elected, in a special election, to Texas house of representatives, 1974, and reelected, 1974-1982; delegate, Democratic National Convention, 1976; elected as a Democrat to the Ninety-eighth and to the six succeeding Congresses (January 3, 1983-January 3, 1997); one of the managers appointed by the House of Representatives in 1988 to conduct the impeachment proceedings against Alcee Lamar Hastings, judge of the United States District Court for the Southern District of Florida; was not a candidate in 1996 for reelection to the United States House of Representatives, but was an unsuccessful candidate for nomination to the United States Senate. 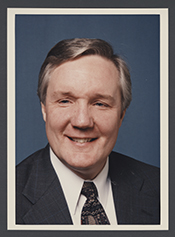