Since entering life as a private citizen in 2011, Richardson was named chairman of APCO Worldwide's executive advisory service Global Political Strategies (GPS) and Special Envoy for the Organization of American States (OAS), adding another platform for initiatives within peace and reconciliation in the Western hemisphere. In addition, Richardson has joined several non-profit and for-profit boards, including Abengoa's International Advisory Board, WRI World Resources Institute, Refugees International and the National Council for Science and the Environment. Richardson has also started two foundations: The Richardson Center for Global Engagement, focusing on conflict resolution diplomacy, and the Foundation to Preserve New Mexico Wildlife with actor and conservationist Robert Redford. He is the author of a forthcoming book, How to Sweet-Talk a Shark: Strategies and Stories from a Master Negotiator, published in fall 2013. Richardson recently completed his second term as Governor of New Mexico in January 2011. He was elected Governor in 2002 and re-elected in 2006 with the support of 69 percent of voters, representing the largest margin of victory for any Governor in state history. Prior to being elected governor, Richardson enjoyed a very successful and fulfilling career in public service; academia and the private sector—few can match his wide-ranging experience and his level of dedication to protecting the rights and improving the quality of life of people in New Mexico, the United States and around the world. Richardson served for 15 years in northern New Mexico representing the 3rd Congressional District. Richardson served in 1997 as the U.S. Ambassador to the United Nations, and in 1998, he was unanimously confirmed by the U.S. Senate as Secretary of the U.S. Department of Energy. While a congressman, Richardson served as a special envoy on many sensitive international missions. He successfully won the release of hostages, American servicemen and prisoners in North Korea, Iraq, Cuba and Sudan. Richardson has been nominated several times for the Nobel Peace Prize. As Governor, Richardson's bold governing style moved New Mexico forward in several important areas, including clean energy, education, public safety, environment, transportation, healthcare and $1 billion in tax cuts for New Mexicans. He made New Mexico the "Clean Energy State" by requiring utilities to meet 20% of New Mexico's electrical demand from renewable sources; and established a Renewable Energy Transmission Authority to deliver New Mexico's world-class renewable resources to market. During his administration, more than $1 billion was invested in public schools, including professional salaries to recruit and retain quality teachers; shifting education money from administration to the classroom; and increased access to early-childhood education. Richardson spearheaded a new commercial space industry in New Mexico anchored by Spaceport America, which is partnering with private tenants like Virgin Galactic to launch tourists into space. During his term as Governor, New Mexico’s film industry exploded—investments made resulted in more than 140 major film and television productions and an estimated economic impact of more than $3 billion. Richardson expanded access to quality health care by implementing several Insure New Mexico! initiatives that are affordable coverage solutions for New Mexico's small employers, nonprofit agencies, individuals and options for every New Mexico child under the age of 12 years old. Before serving as Governor, in 2001, Richardson assumed the chairmanship of Freedom House, a private, non-partisan organization that promotes democracy worldwide. He also worked as a business consultant in Santa Fe and served on several boards including the Natural Resource Defense Council and United Way International. Richardson’s earlier books include Between Worlds and Leading by Example. Richardson has been married to his high school sweetheart, Barbara, for 41 years. Richardson received a BA from Tufts in 1970 and a MA from Tuft's Fletcher School of Law and Diplomacy in 1971. 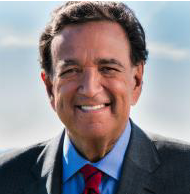