Congressman Harry Teague is a small businessman with a background in the energy industry. He has lived in eastern New Mexico since he was nine years old. As a teenager, Harry went to work in the fields for $1.50 an hour and worked his way up and eventually started a successful business that now employs over 250 people. Harry has been actively involved in his community for over 25 years. He has served as a member and chairman of many boards, for groups including, Big Brothers Big Sisters, County Fair, Black Gold Race Track and Casino, LES Enrichment Facility and the Boys and Girls Club, among many others. He was also appointed to serve on the New Mexico State Transportation Committee and the Association of Commerce and Industry. Harry Teague was elected to the US House of Representatives on November, 4th 2008. Harry serves on the Transportation and Infrastructure and Veterans' Affairs committees. Harry is married to his wife of 38 years, Nancy, and has two children and five grandchildren, all of whom reside in Southern New Mexico. 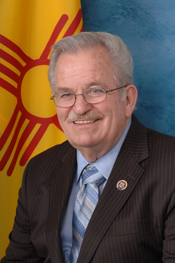