US Senator from Georgia

Max Cleland, who lost both legs and an arm during the Vietnam War and who became a Senator from Georgia, only to lose his seat after Republicans impugned his patriotism, died on Tuesday November 9 2021 at his home in Atlanta. He was 79. After a grenade accident in Vietnam in 1968, Mr. Cleland spent 18 months recuperating. He served in local politics in his native Georgia and as head of the federal Veterans Administration, now the Department of Veterans Affairs, before he was elected in 1996 to the U.S. Senate. Joseph Maxwell Cleland was born on Aug. 24, 1942, in Atlanta, Ga. His mother, Juanita Cleland, worked as a secretary for Standard Oil. His father, Hugh Cleland, was in the Navy at the time. After the war, he moved the family to Lithonia, Ga., outside Atlanta, where he worked in the granite quarries. He later became a traveling salesman. At Stetson University in Florida, he majored in history before graduating in 1964. He later received a master’s degree in history from Emory University. He joined the Army in 1965 and volunteered for Vietnam in 1967. Mr. Cleland moved back to Georgia and at 28 became the youngest person elected to the Georgia State Senate. President Jimmy Carter, a fellow Georgian, named him head of the Veterans Administration in 1977, Mr. Cleland was elected secretary of state in Georgia and served for 14 years, until 1996, when Senator Sam Nunn of Georgia, a Democrat, announced his retirement. Mr. Cleland ran for the seat and narrowly defeated the businessman Guy Millner. Mr. Cleland left no immediate survivors but had maintained a circle of close friends. For the last three decades his caretaker was Linda Dean, who also managed his affairs. A Senator from Georgia; born in Atlanta, Ga., August 24, 1942; grew up in Lithonia and graduated from Lithonia High School 1960; graduated from Stetson University, DeLand, Fla. 1964; received a Masters degree from Emory University 1968; served in the U.S. Army, attaining the rank of captain 1965-1968; wounded in combat in Vietnam; member of the Georgia state senate 1971-1975; unsuccessful candidate for lieutenant governor 1974; consultant to Senate Committee on Veterans Affairs 1975, professional Senate staff member 1975-1977; appointed administrator of United States Veterans Administration by President Jimmy Carter in 1977, and served until 1981; Georgia Secretary of State 1982-1996; elected as a Democrat to the United States Senate in 1996, and served from January 7, 1997 to January 3, 2003; unsuccessful candidate for reelection in 2002. 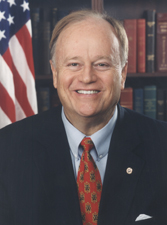