US Senator from Ohio

A Senator from Ohio; born in Cambridge, Guernsey County, Ohio, July 18, 1921; educated in the public schools of New Concord, Ohio; graduated, Muskingum College; served in the United States Marine Corps 1942-1965; test pilot; joined the United States space program in 1959, having been selected as one of the original seven Mercury astronauts; in February 1962, became the first American to orbit the Earth; unsuccessful candidate in 1964 to the United States Senate; elected as a Democrat to the United States Senate in November 1974, for the term commencing January 3, 1975; subsequently appointed by the Governor, December 24, 1974, to fill the vacancy caused by the resignation of Howard M. Metzenbaum for the term ending January 3, 1975; reelected in 1980, 1986, and again in 1992 for the term ending January 3, 1999; not a candidate for reelection in 1998; chairman, Committee on Governmental Affairs (One Hundredth through One Hundred Third Congresses); returned to space as payload specialist aboard the Space Shuttle Discovery, October 29 to November 7, 1998. In retirement from the Senate, Mr. Glenn lived with his wife of 73 years, Anna (he always called her Annie), in a suburb of Washington in addition to Columbus. Ohio State University is the repository of papers from his space and political careers. Mr. Glenn is survived by his wife; two children, Carolyn Ann Glenn of St. Paul and John David Glenn of Berkeley, Calif.; and two grandsons, Daniel and Zach Glenn. 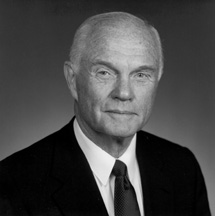