US Senator from Missouri

(daughter-in-law of Albert S. J. Carnahan; mother of Russ Carnahan), a Senator from Missouri; born in Washington, D.C., on December 20, 1933; graduated George Washington University 1955, with BA in business and public administration; writer and Democratic party activist; First Lady of Missouri 1993-2000; appointed to the United States Senate, effective January 3, 2001, to fill the vacancy caused by the death of her husband, Governor Mel Carnahan, who was elected posthumously on November 7, 2000; served from January 3, 2001, to November 25, 2002, when an elected successor for the remainder of the term took office; unsuccessful candidate for election to remainder of the term in 2002. 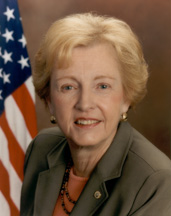