US Representative from Ohio

A Representative from Ohio; born in Findlay, Hancock County, Ohio, February 11, 1944; B.A., Miami University, Oxford, Ohio, 1966; J.D., Ohio State University College of Law, Columbus, Ohio, 1969; Federal Bureau of Investigation, 1969-1972; lawyer, private practice; member of the Ohio state house of representatives, 1972-1981; delegate to Ohio state Republican conventions, 1972-1980; delegate to Republican National Conventions, 1976 and 1984; elected as a Republican to the Ninety-seventh Congress by special election, to fill the vacancy caused by the death of United States Representative Tennyson Guyer, reelected to the twelve succeeding Congresses (June 25, 1981-January 3, 2007); chair, Committee on Financial Services (One Hundred Seventh through One Hundred Ninth Congresses); not a candidate for reelection to the One Hundred Tenth Congress in 2006. Following his retirement, Oxley became a lobbyist in the financial sector. He was also a member of the University of Findlay board of trustees and active with Miami University of Ohio, his alma mater 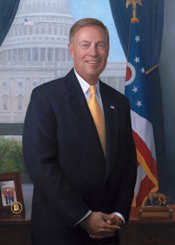