Administrator of the USAID; US Representative from Wisconsin; Ambassador to Tanzania

Ambassador Mark Green is currently serving as President of the International Republican Institute (IRI), a nonpartisan, nonprofit organization dedicated to advancing citizen-responsive, citizen-centered governance around the world. In addition to his leadership of IRI, during 2011-16, he served on the Board of Directors of the Millennium Challenge Corporation. In 2007-09, he served as the U.S. Ambassador to Tanzania, and oversaw major programs in the areas of global health and economic development. Prior to his role as ambassador, Mr. Green represented Wisconsin’s 8th District in the U.S. House of Representatives and served on the House Judiciary and International Relations Committees. He helped craft key policy initiatives like the Millennium Challenge Act and President George W. Bush’s international AIDS program. He holds a law degree from the University of Wisconsin, a bachelor’s degree from the University of Wisconsin–Eau Claire Senior Director with the U.S. Global Leadership Coalition Ambassador to Tanzania (2007-09) UW-Eau Claire alumnus (BA 1983) Former Representative from Wisconsin; born in Boston, Suffolk County, Mass., June 1, 1960; graduated from Abbot Pennings High School, De Pere, Wis.; B.A., University of Wisconsin, Eau Claire, Wis., 1983; J.D., University of Wisconsin Law School, Madison, Wis., 1987; lawyer, private practice; member of the Wisconsin state assembly, 1992-1998; elected as a Republican to the One Hundred Sixth and to the three succeeding Congresses (January 3, 1999-January 3, 2007); not a candidate for reelection, but was an unsuccessful candidate for Governor of Wisconsin in 2006. 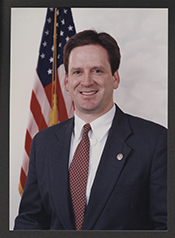