When it was time for Jim Click to learn the car business, he didn't go to work at his grandfather's Chrysler-Plymouth store in Shawnee, Okla. Nor did he join his father at his Chevrolet dealership in Altus, Okla. Jim was fresh out of Oklahoma State University, where he played center and linebacker for the Cowboy. His father and grandfather sent him to California, to study under another family member: the legendary Holmes Tuttle. In the 1920s, Tuttle had hitchhiked to California, where he became a successful Los Angeles car dealer whose clientele included an actor, one Ronald Reagan. Tuttle also became a prominent Republican fund-raiser and is credited with persuading Reagan to enter politics in 1964 to run for governor of California. 'I went to L.A. to learn the business, then I was to go back to Oklahoma,' Click says. 'I haven't been back but to visit.' Click learned quickly and soon was sent to run Tuttle's Ford dealership in Tuscon, Ariz. Today, Click and Tuttle's son, Bob Tuttle (who took a 61/2-year leave of absence to work in the Reagan White House), are co-owners of the Tuttle Click Automotive Group, which operates a dozen outlets in Arizona and in Orange County, Calif. Although they are business partners and relatives, who shuttle between Tucson and Orange County for monthly meetings, Click and Tuttle also are competitors in Tucson, where the primary competition for Jim Click Ford is Holmes Tuttle Ford. Tuttle is the sole owner of his father's store, and he's proud to have kept his father's name on the business. 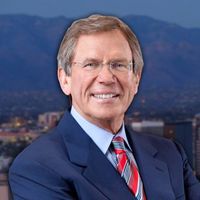