US Representative from California

Jerry Lewis, a powerful House Republican whose largess to his district in California established him as a master of the earmark but led to an investigation of his actions by the Justice Department, died on July 15 at his home in Redlands, Calif. He was 86. His son Dan confirmed the death but said he did not know the cause. In addition to his son Dan, Mr. Lewis is survived by his wife, Arlene (Willis) Lewis; a daughter, Jenifer Engler; two other sons, Jerry Jr., and Jeff; a stepdaughter, Julie Willis Leon; two stepsons, Jimmy and Marty Willis; six grandchildren; three great-grandchildren; and two brothers, Ray and John. His marriage to Sally Lord ended in divorce. Representative from California; born in Seattle, King County, Wash., October 21, 1934; graduated from San Bernardino High School, San Bernardino, Calif., 1952; B.A., University of California, Los Angeles, Calif., 1956; Coro Foundation, 1956-1957; insurance businessman; member, San Bernardino School Board, San Bernardino, Calif., 1964-1968; staff, United States Representative Jerry Pettis of California, 1966; member of the California state assembly, 1969-1978; elected as a Republican to the Ninety-sixth and to the fifteen succeeding Congresses (January 3, 1979-January 3, 2013); chair, House Republican Conference (One Hundred First and One Hundred Second Congresses); chair, Committee on Appropriations (One Hundred Ninth Congress); was not a candidate for reelection to the One Hundred Thirteenth Congress in 2012. 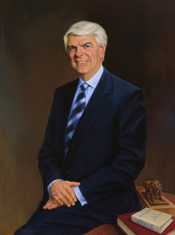