Former US Representative from Michigan; Trump nominee to be Ambassador to the Netherlands

A Representative from Michigan; born in Groningen, The Netherlands, October 30, 1953; graduated from Holland Christian High School, Holland, Mich.; B.A., Hope College, Holland, Mich., 1975; M.B.A., University of Michigan, Ann Arbor, Mich., 1977; elected as a Republican to the One Hundred Third and to the eight succeeding Congresses (January 3, 1993-January 3, 2011); chair, Permanent Select Committee on Intelligence (One Hundred Eighth and One Hundred Ninth Congresses); not a candidate for reelection in 2010, but was an unsuccessful candidate for nomination for governor of Michigan. He was a distinguished fellow at the Heritage Foundation and a Shillman Senior Fellow at the Investigative Project on Terrorism. 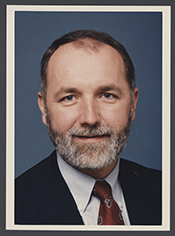