US Ambassador to Turkey; Former US Senator and Representative from Arizona

Jeff L. Flake is was confirmed as the US Ambassador to the republic of Turkey on Oct 26 2021. a Distinguished Fellow at Arizona State University and a Distinguished Fellow at the Sorensen Center for Moral and Ethical Leadership at Brigham Young University. He also serves on the Senior Advisory Committee at Harvard’s Institute of Politics. Flake was a Member of Congress for 18 years, representing Arizona in the U.S. Senate (2013-2019) and the U.S. House of Representatives (2001-2013), A Senator and a Representative from Arizona; born in Snowflake, Navajo County, Ariz., December 31, 1962; graduated from Brigham Young University, Provo, Utah, 1986; M.A. Brigham Young University, Provo, Utah, 1987; elected as a Republican to the One Hundred Seventh and to the five succeeding Congresses (January 3, 2001-January 3, 2013); was not a candidate for reelection to the House of Representatives but was elected as a Republican to the United States Senate in 2012 for the term ending January 3, 2019. 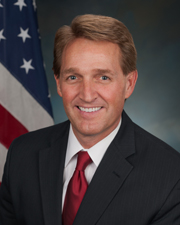