US Senator from Wyoming

Former Sen. Mike Enzi died Monday July 26 2021 after being hospitalized in relation to a bicycle accident. He was 77. Enzi served four terms in the Senate before retiring in 2020 as chairman of the powerful Budget Committee. He was replaced by former Rep. Cynthia Lummis, a Republican. Prior to his Senate career, Enzi had served as mayor of Gillette and as a member of the state’s House and Senate. He also served on the U.S. Department of Interior Coal Advisory Committee. A graduate of The George Washington University and the University of Denver, Enzi was formerly a member of the Wyoming National Guard and an accountant who owned and operated family shoe stores in Wyoming and Montana. A Senator from Wyoming; born in Bremerton, Wash., February 1, 1944; attended public schools of Thermopolis and Sheridan, Wyo.; graduated, Sheridan High School 1962; received degree in accounting, George Washington University 1966; M.B.A. in retail marketing from Denver University 1968; served in Wyoming National Guard 1967-73; owned and operated family shoe stores in Gillette and Sheridan, Wyo., and Miles City, Mont.; accountant; Certified Professional in Human Resources, 1993-present; Mayor of Gillette 1975-1982; member, Wyoming house of representatives 1987-1991; member, Wyoming state senate 1991-1996; commissioner, Western Interstate Commission for Higher Education 1995-1996; elected as a Republican to the United States Senate in 1996; reelected in 2002, and again in 2008 for the term ending January 3, 2015; chair, Committee on Health, Education, Labor, and Pensions (One Hundred Ninth Congress). 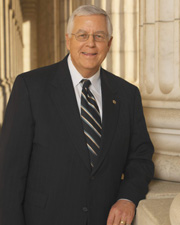