David C. Novak Chairman and Chief Executive Officer of Yum! Brands, Inc., franchised restaurants. Director since 2001. Prior to becoming Chairman in January 2001 and Chief Executive Officer in January 2000, Mr. Novak was Vice Chairman and President of Tricon Global Restaurants, Inc. (now known as Yum! Brands, Inc.) from June 1997 until January 2000; Group President and Chief Executive Officer, KFC and Pizza Hut, North America, subsidiaries of PepsiCo, from August 1996 until June 1997; and President, KFC North America, a subsidiary of PepsiCo, from 1994 until 1996. He received a B.A. degree from the University of Missouri. He had been a director of Bank One Corporation from 2001 until 2004. Mr. Novak is also a director of Yum! Brands Foundation and a director of the Friends of the United Nations World Food Program. 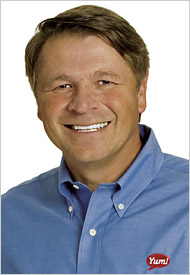