In some non-Election Day news, Maureen DeRosa, chief of staff to Senate Minority Leader John Sampson, is jumping ship from her $140,000-a-year post for a job in the Cuomo administration, according to several sources familiar with the matter..derosasign DeRosa will be working in the administration’s all-important appointments office, but it is unclear exactly what her title will be. DeRosa is ending a relatively short tenure as the top aide to Sampson, D-Brooklyn. She joined his office in May 2011, replacing the departed Shelly Meyer. Before working in Sampson’s office, she was a senior policy advisor to Attorney General Eric Schneiderman. Her CV also includes stints working for the Senate Codes Committee (which was chaired by then-Sen. Eric Schneiderman), the Assembly Ways and Means panel, as well as time working as a lobbyist. As The Daily News pointed out when she joined Sampson’s office, there was minor buzz around her during the 2010 AG campaign after it was reported her husband, Georgio DeRosa, was a lobbyist for the scandal-plagued Aqueduct Entertainment Group that received a lucrative and later highly scrutinized racino contract in Queens. He was mentioned in the IG’s report, but never accused of wrongdoing. 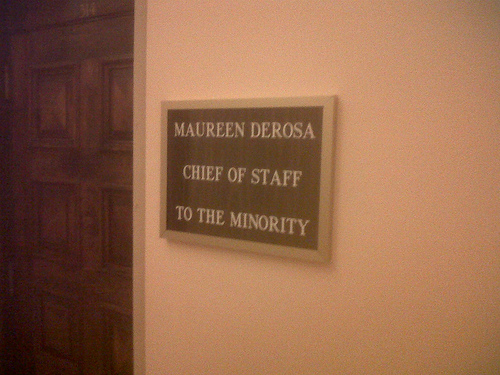