David J. O'Reilly is chairman and chief executive officer of Chevron Corporation. A native of Dublin, Ireland, O'Reilly earned his bachelor's degree in chemical engineering in 1968 from University College, Dublin, from which he also received an honorary doctor of science degree in June 2002. Upon graduation in 1968, he began his career with Chevron Research Co. as a process engineer. After serving in positions of increasing responsibility, in 1989, O'Reilly was elected senior vice president and chief operating officer of Chevron Chemical Co. In October 1991, O'Reilly was elected a vice president of Chevron Corporation, responsible for strategic planning and coordination of the company's quality improvement activities. In September 1994, he was elected president of Chevron Products Co., responsible for the company's U.S. refining and marketing operations. From November 1998 until January 2000, he served as vice chairman of the board of Chevron Corporation, responsible for Chevron's worldwide exploration and production and corporate human resources. He was elected chairman and chief executive officer on January 1, 2000. O'Reilly is a director and a member of the Executive Committee and Policy Committee of the American Petroleum Institute. He is also a director of the Peterson Institute for International Economics. He is a member of the World Economic Forum's International Business Council, the National Petroleum Council, The Business Council, The Business Roundtable, the JPMorgan International Council, the King Fahd University of Petroleum & Minerals International Advisory Board, and the American Society of Corporate Executives. O'Reilly was born in 1947. ChevronTexaco; J.P. Morgan; Business Roundtable; Business Council; Trilateral Commission; National Petroleum Council; DAVOS. 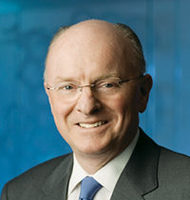