Formerly Special Presidential Envoy for Hostage Affairs Robert C. O’Brien, an attorney, diplomat, and author, is a founding partner of Larson O’Brien LLP. His practice focuses on complex litigation and international arbitration. Mr. O’Brien has extensive government and private sector experience in national security and foreign policy matters. He has served as an arbitrator in over twenty international proceedings and been appointed by the Federal courts to serve as a Special Master in over a dozen complex cases. Mr. O’Brien was appointed as a Representative to the 60th session of the United Nations General Assembly in 2005, served as Co-Chairman of the Department of State’s Public-Private Partnership for Justice Reform in Afghanistan from 2007 to 2011 and was appointed to serve as a member of the U.S. Cultural Property Advisory Committee in 2008. He was a senior legal officer with the United Nations Security Council in Geneva, Switzerland from 1996 to 1998. Mr. O’Brien served as a major in the JAG Corps of the U.S. Army Reserve. Mr. O’Brien received a B.A. degree from UCLA and a J.D. degree from Boalt Hall, UC Berkeley School of Law. 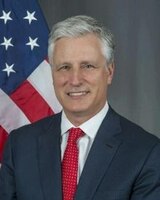