Stephen Edward Broden is a former Republican political candidate from the state of Texas in the 30th congressional district (map) for the United States House of Representatives. He was defeated by Democratic incumbent Eddie Bernice Johnson. Broden is a businessman, political commentator, former professor, and an activist for pro-life causes. Broden graduated from the University of Michigan with a Bachelor and then a Master of Arts degree in Communication, and he later studied at the Dallas Theological Seminary where he received a Master of Arts in Bible Studies. He served as an Adjunct Professor at Dallas Baptist University from 1990 to 1992 and spent 10 years in the private sector at Atlantic Richfield Company (ARCO) in Human Resources. He has been a business owner of several self-serve car wash facilities, and has also worked as a newscaster, disc jockey, and radio broadcaster. Currently he is a co-host on the radio program Life and Liberty for KSKY, 660 AM and is also a radio broadcaster of One-Minute "thought of the day" commentaries on this station. Broden founded the Fair Park Bible Fellowship Church in 1987 and serves as its Senior Pastor. He has served as President of the Fair Park Friendship Center for over 18 years and as its Executive Director for over 11 years. The center provides assistance to the community's "inner-city" families, including a clothing store and back-to-school rally where children from neighborhood families are provided with donated school supplies and family counseling. Broden advocates in the Fair Park and South Dallas areas for economic opportunity, improved access to education, and against abortion. He is a spokesman for the black pro-life movement in Dallas and a contributor to blackprolifemovement.blogspot.com. He is a founder of Ebony Berean, an organization whose mission includes informing African-American Pastors of the "Culture War" He is a speaker for the Tea Party movement and advocates for a return to what he considers proper Constitutional principles in government and the Judeo-Christian values that he claims undergird the founding of the United States of America. He supports an individual's right to bear arms, which he claims emanates from the Second Amendment, and a broad conception of the Tenth Amendment to the United States Constitution. Broden has been a recurring political commentator on Fox News Channel, including appearances on the Glenn Beck show. He was awarded “Champion of the Republican Party” by the NRCC Business Advisory Council Texas and has also received the Ronald Reagan Gold Medal Award. From 1999 to 2002 he served as Republican Precinct Chairman in DeSoto, Texas. 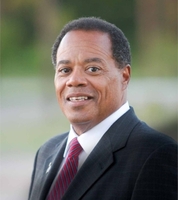