US Representative from Indiana (IN-2)

U.S. Representative for Indiana's 2nd congressional district since 2013. Jakie Walorski started her political career as a member of the Indiana House of Representatives from 2005 to 2010. In 2010, she won the Republican nomination for Indiana's 2nd congressional district, but lost in the general election to Democratic incumbent Joe Donnelly. In 2012, Walorski went on to win the open seat. She started her career as a reporter at WSBT-TV and later worked as a Development Director to raise funds for local colleges and universities. Jackie is a native Hoosier, born and raised in South Bend, Indiana. She holds a BA from Taylor University 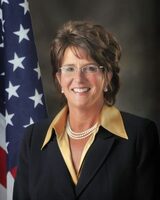