Philip Moeller is serving his second term on the Federal Energy Regulatory Commission (FERC), having been nominated by President Barack Obama and sworn in on July 16, 2010, by Congresswoman Cathy McMorris Rodgers (R-WA), for a term expiring June 30, 2015. He was first nominated to FERC by President George W. Bush in 2006 and sworn into office on July 24, 2006, by Chief Justice of the United States John Roberts. From 1997 through 2000, Commissioner Moeller served as an energy policy advisor to U.S. Senator Slade Gorton (R-WA), where he worked on electricity policy, electric system reliability, hydropower, energy efficiency, nuclear waste, energy and water appropriations, and other energy legislation. Prior to joining Senator Gorton’s staff, he served as the Staff Coordinator for the Washington State Senate Committee on Energy, Utilities and Telecommunications, where he was responsible for a wide range of policy areas that included energy, telecommunications, conservation, water, and nuclear waste. Before becoming a Commissioner, Mr. Moeller headed the Washington, D.C., office of Alliant Energy Corporation. Prior to Alliant Energy, Mr. Moeller worked in the Washington office of Calpine Corporation. Mr. Moeller was born in Chicago, and grew up on a ranch near Spokane, Washington. He received a Bachelor of Arts in Political Science from Stanford University. 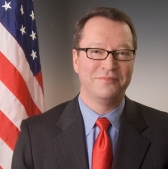