Chairman of Manchester Financial Group; Trump nominee to be US Ambassador to the Bahamas - Withdrawn November 2019

If confirmed, “Papa” Doug Manchester of California will serve as Ambassador Extraordinary and Plenipotentiary of the United States of America to the Commonwealth of the Bahamas. Mr. Manchester is a leading industrialist with accomplishments on a national and international scale in telecommunications, radio broadcast, medical instrumentation, publishing, and real estate development. Since 1970, he has been Chairman of Manchester Financial Group, which has multiple divisions including Manchester Grand Resorts and M Commercial Properties. He leads the Manchester Charitable Foundation and currently serves on the Board of Trustees of The Sanford Burnham Medical Research Institute. He was married to his first wife, Betsy Manchester, for four decades. They lived an opulent lifestyle that included multiple homes, one an $18 million mansion on the Pacific coast, as well as regular use of private jets and extensive travel, court records show. The couple separated in 2009 and began negotiating over their finances, which included about $50 million in liquid assets, documents show. Mr. Manchester earned a B.S. from San Diego State University. 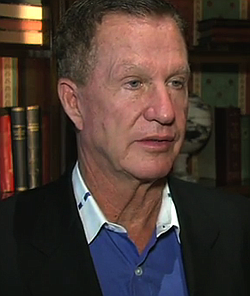