Walter Scott, former chairman of Peter Kiewit Sons’ Inc., died Saturday September 25 2021. He spent his entire business career with Kiewit before turning his focus to charitable endeavors. Walter Scott, Jr. had been Kiewit's Chairman of the Board since September 1979, and a director since April 1964. Mr. Scott was been Chairman Emeritus of Peter Kiewit Sons', Inc. ("PKS") since 1998. Mr. Scott was also a director of PKS, Berkshire Hathaway Inc., MidAmerican Energy Holdings Company and Valmont Industries, Inc. The Scott connection with the Kiewit company went back to his father, the late Walter Scott. Peter Kiewit hired the elder Scott in 1926 to supervise building the tower on the State Capitol. Scott also served as a board member of Warren Buffett's Berkshire Hathaway conglomerate from 1988 until his death, and even invested alongside Berkshire in the company's utility and energy unit. Scott held about 8% of Berkshire Hathaway Energy's stock and 105 Class A Berkshire shares with Buffett's Berkshire holding nearly all the rest. As the co-founder of the philanthropic fundraising organization Heritage Services and its leader for 30-plus years, Scott had an outsized hand in more than $1 billion in major facility projects in Omaha, projects that have altered the city’s quality of life. The Heritage 12-member board came to be composed of Omaha’s most prominent and powerful philanthropists, enabling them to leverage their political clout, business acumen and dollars to do still bigger things in Omaha. Over time, the Heritage board would become a kind of unofficial board of directors for the city. Heritage support for any civic project virtually guaranteed it would become a reality. And from the start, Scott was Heritage’s unquestioned leader. Scott's net worth is pegged by Forbes Magazine at $4.2 billion and he made plans to leave the majority of his estate to charity — an example first set for him by his mentor, Peter Kiewit. Scott joined Kiewit full time after earning an engineering degree from Colorado State University, which later became another recipient of his philanthropy. In his early years with Kiewit, Scott went wherever the construction work took him, moving 17 times. Scott, his first wife, Carolyn, and their first two children once lived over a neighborhood bar. Carolyn Scott died in 1983. Walter Scott later married the former Suzanne Singer in 1987. 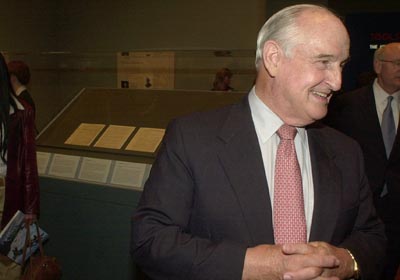