Ward J. “Tim” Timken, Jr. serves as chairman, chief executive officer and president of TimkenSteel Corporation (NYSE: TMST). TimkenSteel is a leader in customized alloy steel products and services. TimkenSteel was spun off from The Timken Company in 2014. Prior to the spinoff, Timken served as chairman of The Timken Company. He was first elected to The Timken Company’s board of directors in 2002. He joined the company’s steel business in 1992 and progressed through a series of roles in sales and marketing management and geographic leadership in Europe and Latin America, where he helped fuel the company’s global growth. He served as vice chairman, playing a pivotal role in the development of strategy that expanded the company’s product portfolio into industrial market sectors. He also served as president of steel before being named company chairman in 2005. Earlier in his career, Timken opened and managed the Washington, D.C., office of McGough & Associates, a Columbus, Ohio-based government affairs consulting firm. Timken serves on the boards of the Timken Foundation and Pella Corporation, a privately held window and door manufacturing company headquartered in Pella, Iowa. 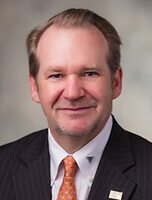