Stephen D. Pryor is a member of the Board of Directors of the Foundation for Government Accountability. He retired as president of ExxonMobil Chemical Company in January, 2015, after more than 43 years of ExxonMobil service. Before his appointment in 2008 as president of ExxonMobil Chemical Company, he was president of ExxonMobil Refining and Supply Company and president of ExxonMobil Lubricants and Specialties Company. He also served as vice president of ExxonMobil Corporation from 2004 until his retirement. Prior to the ExxonMobil merger in 1999, Pryor was executive vice president of Mobil’s International Marketing and Refining Division and president of Mobil Asia Pacific. In 1971, he joined Mobil Corporation’s U.S. Marketing Division and led downstream and chemical business units in Cyprus, New Zealand, the United Kingdom, and the United States. Pryor was a member of the executive committee of the American Chemistry Council (ACC) and the Society of Chemical Industry (SCI), and a director of the International Council of Chemical Associations. He received ACC’s Distinguished Leadership Award in 2014, SCI’s 2015 Chemical Industry Medal and the American Fuel and Petrochemical Manufacturers’ 2016 Petrochemical Heritage Award. He chaired the Downstream Committee of the American Petroleum Institute and the Energy Committee of the National Association of Manufacturers. He is chair of The Immokalee Foundation and a director of Catholic Distance University. He is a trustee emeritus of Lafayette College and former board vice-chair. He earned a Bachelor’s degree in biology from Lafayette College and an MBA from the Harvard University Graduate School of Business. 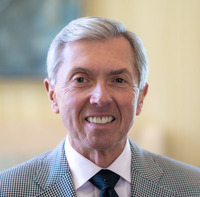